Using an energetic plasma or a glow discharge created from a gaseous species to remove impurities, organics and contaminants from surfaces is called Plasma Cleaning.
Typical gases used such as argon and oxygen, produce a plasma from high frequency voltages ionizing the gas at low atmospheric pressure in a controlled sealed chamber. Organics can be removed chemically by using oxygen. Argon is used for more of a physical removal process. 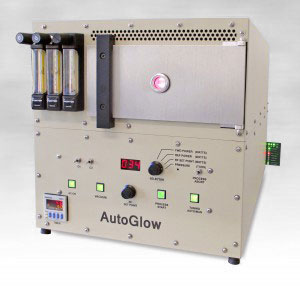 The color of the plasma “glow” that is seen is the result of the type of gas that is being used. The common pale blue/pink color that is seen is generated from using oxygen in the cleaning chamber.

With our vast experience working with Plasma cleaning systems, we have produced the most efficient plasma cleaning system on the market. What makes a plasma cleaning system efficient is being able to tightly control the power (watts) that is being used to produce the plasma along with pressure and flow rate of the gas. The chamber design along with the matching network deliver a plasma with very low reflected power—which is required for a good and repeatable cleaning process.
The Glow Research AutoGlow can provide power from 10 to 300 watts, and is adjustable in 1 watt increments. It is a tabletop quartz chamber system designed to be used in the semiconductor and R&D industries, and is available at an extremely moderate cost for such a versatile and effective system.