Using our GLOW plasma system with room air as a process gas–Dr. White found that the ideal process time was only 3-5 seconds.  Read more about his findings for improvement of wettability and surface free energy on Polypropylene (PP) using a plasma cleaner.

This paper was presented by Dr. Andrew R. White (a) at the American Chemical Society (Fall 2019).

When applying coatings, inks, adhesives, and other materials to a surface, controlling the surface properties becomes critical. In particular, the wettability – the ability of the process liquid to spread and adhere to the solid surface – needs to be controlled. As more products rely on plastics, from medical devices to automobile bumpers, this concept has grown more important since plastics generally exhibit poor wettability for many liquids. This is due to the low surface free energy of many plastics. For example, polypropylene (PP), a widely used polymer due to its low cost, machinability, good chemical resistance and mechanical properties, is naturally hydrophobic, causing many water-based liquids to poorly wet the material.

To improve wettability, chemical adhesion promoters have been used, but cost and environmental concerns due to solvents such as toluene have prompted industry to seek alternatives such as flame [1] and plasma [2] treatment. Plasma treatment, in which the surface is placed in a chamber under vacuum and bombarded by ionized gas, is a safe and effective technique for increasing the wettability without harmful gases or high temperatures, and complex geometries can be easily treated. In the case of polymers like PP, wettability is enhanced by the formation of hydrophilic functional groups such as carbonyl, carboxyl, and hydroxyl at the surface [3]. 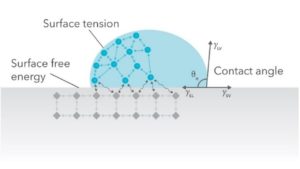 Fig. 1 – Schematic of a sessile drop and the balance of surface tensions at the three-phase contact line.

When a drop of liquid rests on a solid surface, molecules at the air-liquid and solid-liquid surfaces experience strong cohesive forces with their liquid neighbors and weaker adhesive forces with neighboring gas and solid molecules. The result is a surface tension (mN/m) that behaves similar to an elastic membrane. The same phenomenon occurs at the solid-gas surface. Each of these three surfaces have their own surface tensions: liquid-gas (γ_LV), solid-liquid (γ_SL), and solid-gas (γ_SV). Alternatively, γ can be interpreted as the energy required to form new surface area. In this view, γ takes the name surface free energy and can have the equivalent units mJ/m2.

At the three-phase contact line where the liquid, gas, and solid meet, each of these surface tensions are balanced by the contact angle θ made between the drop and the solid (Fig. 1). This balance is described by the Young equation [4],

The visual simplicity of Eq. 1 is deceptive. First, the equation assumes a smooth homogeneous surface, a pure liquid, and the entire system is in a thermodynamic equilibrium. Second, each surface tension can be considered the sum of a number of components representing different intermolecular forces: γ_LV=γ_LV^d+γ_LV^p+γ_LV^h+γ_LV^i+γ_LV^ab+γ^o where d, p, h, i, and ab respectively represent the dispersion, polar, hydrogen-bonding, induction, and acid-base interactions. The γ^o represents additional interactions. One of the more widely used approaches is to consider only the dispersive and polar components [5]. Using a geometric mean, the energy difference for a liquid molecule to reside at the surface becomes

After combining Eq. 3 with Eq. 1, the extended Fowkes or OWRK equation is found [5]:

Equation 4 is used to find two unknowns, γ_SV^d and γ_SV^p, and thus contact angle measurements with at least two liquids with known γ_LV^d and γ_LV^p are needed. One liquid should be dominantly polar (e.g. water or glycerol) and one liquid should be dispersive (e.g. diiodomethane). Additional probe liquids with comparable polar and dispersive components such as ethylene glycol can be used to improve modeling. Afterward the total surface free energy of the solid-gas surface is γ_SV^tot=γ_SV^d+γ_SV^p.

Squares of polypropylene 1×1 cm in size were cut from a single sheet of smooth untreated polypropylene (McMaster-Carr). The squares were washed with ethanol followed by DI water and dried with N2. Three probe liquids were used: ultrapure water (>18.2 MΩ⋅cm) (Millipore), 99% diiodomethane (Oakwood Chemical), and 99% ethylene glycol (Oakwood Chemical). The air-liquid surface tensions and dispersive and polar components of each probe liquid from ref. [6] are summarized in Table 1.

Polypropylene samples were treated with air plasma in the Glow Plasma System (Glow Research, Tempe, AZ) for durations ranging from 1 to 120 s. The plasma system operated at 50 W, 100 kHz, and the chamber pressure was 1.0 torr. After treatment the contact angles of each probe liquid were measured on the squares using an Attension Theta Optical Tensiometer (Nanoscience Instruments, Phoenix, AZ). Each measurement occurred approximately 2 min immediately after the plasma treatment finished. Drop volumes were fixed at 2 μl. For each measurement, images were recorded for 1 s at 15 frame/s, and the contact angle was taken as the mean value from all 15 images. Experiments were performed in duplicate for each treatment time considered. Using the OneAttension software, the contact angles were used to determine the surface free energy of the polypropylene using the OWRK method.

Using contact angles in Fig. 3A, the OWRK method (Eq. 4) was used to determine the surface free energy (γ^tot) of the PP-air surface as well as the polar (γ^p) and dispersive (γ^d) components in Fig. 3B. This we done automatically in the OneAttension software. Initially γ^tot=24.2 mJ/m2 but then increases to 46.8 mJ/m2 after 3 s of treatment. The surface free energy then decreases to a local minimum at 15 s and afterwards increases, approaching 40 mJ/m2.

The dispersive and especially polar components are also quite dependent on treatment time. Initially γ^p~0 as the PP surface free energy is almost entirely dispersive. After only seconds of plasma exposure, γ^p increase up to 12 mJ/m2 while γ^d also increases to about 35 mJ/2. At 15 s though, the polar component drops significantly, corresponding to the drop in γ^tot and reduction in hydrophilicity in Fig. 3A. For treatment times greater than 15 s, γ^p gradually increases while γ^d decreases slightly. The dynamic nature of surface free energy and water contact angles agree with similar observations of plasma treated PVC [7] and PDMS [8].

The effect of degradation of the enhanced wettability with time after initial exposure was also investigated in Fig. 4. Here, 6 samples of PP were simultaneously exposed to plasma for 3 s and then placed in a Petri dish in atmospheric conditions. One sample was selected for a SFE measurement at 2 min, 15 min, 30 min, 2 hr, 2 days, and 7 days. The resulting contact angles are shown in Fig. 4A on the semilog plot. The water contact angle quickly increases from 61 to 74 in the first two hours. After two hours, the water contact angle increases slightly over the course of a week but remains hydrophilic. In Fig. 4B the resulting reduction in SFE is shown versus time. The SFE decays roughly logarithmically with time with the form γ^tot=C_1 ln⁡t+C_2 which is shown as the dotted line in Fig. 4B. The constants corresponding to this best fit are C_1=-1.16 mJ/m2 and C_2=45.6 mJ/m2 with t measured in min.

Fig. 4 – In A the contact angles of PP samples exposed to plasma for 3 s and then left in atmospheric conditions are shown after different times up to approximately 1 week. In B the corresponding surface free energy γ^tot as well as dispersive and polar components, γ^d and γ^p, from A are shown.

The wettability of polypropylene (PP), a naturally hydrophobic material, was significantly improved using plasma treatment and plasma cleaning with the Glow Plasma System. With an Attension Theta optical tensiometer, the contact angles of three probe liquids – water, diiodomethane, and ethylene glycol – were measured on PP after different plasma treatment times.

This time-dependency has been observed for plasma treatment of other polymers such as PVC [7] and PDMS [8]. The significant increase in PP polarity (γ^p) for short treatment times suggests efficient oxidation and formation of carboxylic, carbonyl, hydroxyl, and other hydrophilic functional groups. For treatment times between 5-15 s, however, competition between oxidation and subsequent reorientation, cross-linking and destruction of surface species [7] tends reduce the PP polarity, decrease surface free energy and decrease wettability. For the system used here, the greatest improvement in PP wettability and increase in surface free energy is observed for treatment times from 3-5 s.

The value of the quantitative capabilities of the Attension Theta Optical Tensiometer and accompanying OneAttension software is demonstrated by the ability to precisely determine the optimum plasma treatment time for PP using air-plasma, and provide physical insight into the underlying process. Additional investigation into the effect of chamber pressure and power can also be studied with this technique. For any process requiring adhesion of liquids to polymers, the Theta platform and OneAttension software provide an efficient and intuitive means to optimize a plasma treatment protocol. 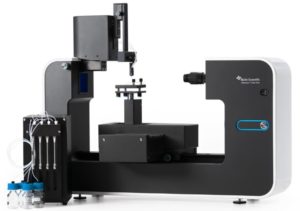 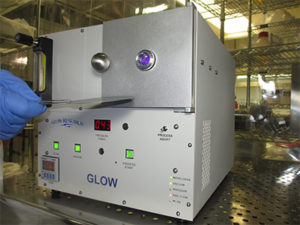 To see a video on the GLOW plasma system, click HERE