Plasma Descum:  This procedure is used to remove thin residual layers of photoresist areas following photoresist development.  These residual films are typically less than 1,000 Angstroms thick, but can interfere significantly in resolving the pattern during etching, especially if the pattern geometries are small (such as contact windows).  A plasma descum can generally remove these residues in less than a minute. 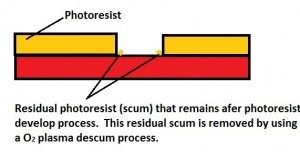 The wafers or substrate is loaded into the reactor chamber, and a plasma is established by using oxygen as the process gas.  Some people add a 4% to 8% CF4 to the oxygen if the resist is difficult to remove.   Some have achieved success using a lower grade of oxygen (containing a small % of water vapor).  A plasma is established for the appropriate time, usually about 30 seconds to minute–and the system is vented to atmosphere at the conclusion of the process.  After inspection, the wafers or sample is now ready for etching.  Good uniformity is required for a good plasma descum process.  The AutoGlow 200 is recomended for this applicaiton–a single wafer system that can accomidate up to a 200 mm wafer or square substrate, and has both plasma or RIE configurations.   The ST1200 system is recommended for more challenging line width geometries  click here for more information on the ST1200

The ST1200 is designed with a shower-head gas distribution and is suggested for improved plasma descum uniformity.

The plasma descum process itself demands stringent control be maintained so as not to adversely affect the integrity of the photoresist layer or alter the pattern quality.  Serious degradation in the uniformity of etching can result.

Arkansas State University has a AutoGlow 200 used for Plasma Organic Descum and RIE: 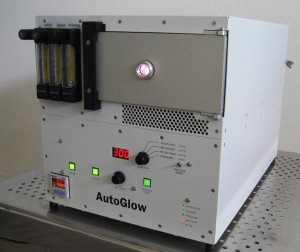